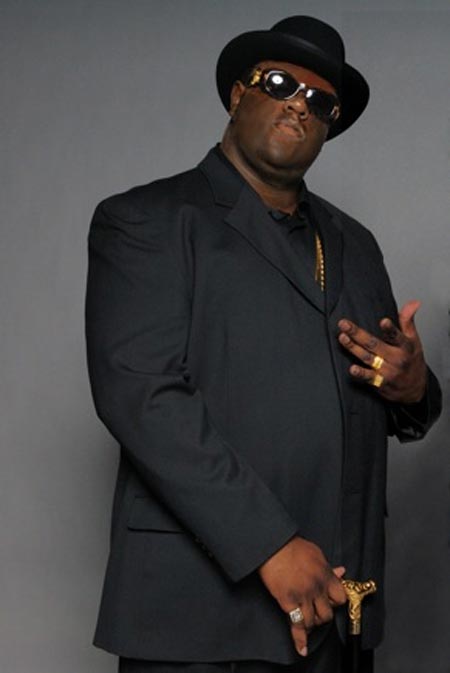 I know absolutely zilch about who Gold Dragon is. The website cryptically states: "Remix producer from Seattle, now living in New York, previously had a recording studio and an independent record label, now focused on making beats for mixtapes." Whoever he/she is, they have skillz. They know what they’re doing. In this case the doing is an expert remix tape—so expert that much of the beats sound like this is the way the raps were meant to be recorded.

But for sure Biggie did not have this kind of mash-up in mind. Gold Dragon describes the project this way: “Dakar mixes classic funk/soul breaks with movie soundtracks and Senegalese Sabar drumming to paint a special backdrop for Biggie's classics. Dakar, the capital of Senegal, has one of the richest hiphop scenes in Africa, thanks to a fusion of styles including the Sabar drumming of the Wolof people.”

Additionally, on his website Gold Dragon identifies all the sample sources and even includes the covers of the source recordings. If this music strikes you in any positive way, you really ought to go to the Gold Dragon website and check out all the different elements that went into the remixtape.

As far as the raps go, they are what they are. The Notorious B.I.G. was never known as a conscious rap artist even though hardcore fans proclaim him the best rapper ever—yes, better than Rakim, Jay-Z, Lil Wayne or anyone you can name. I think Biggie was a perfect example of the talented misfit, the bourgeoisie-influenced artist who is, to paraphrase Chairman Mao, a pernicious influence precisely because his technique is so good at the same time that his message is, at best, backwards.

I generally find Biggie unlistenable because of his content but this remix by Gold Dragon has caught my ear because of its ingenious mashup of various samples—I know I never expected to hear Biggie rapping over Marvin Gaye or Michael Jackson samples. But then again, one of the great beauties of black music is that wonders never cease.


Here is one of many websites where you can download the Dakar mixtape. 
This entry was posted on Monday, February 15th, 2010 at 4:43 am and is filed under Cover. You can follow any responses to this entry through the RSS 2.0 feed. You can leave a response, or trackback from your own site.


One Response to “BIGGIE / “Biggie Re•Mix/Tape””

Wow… my girl and I just watched the biggie movie on dvd the other night, so the timing of this mixtape is quite funny. Looking forward to givig it a listen.

I probably feel the same about biggie song: unlistenable because content. End up having just a dark feeling after a little while… but I was caught up in the Biggie/2pac hype in my teenage years, which was about the time they were at their prime (as well as east-west so-called beef).

So yeah, wana have a listen. Thanx Kalamu.