LIL’ RASCALS BRASS BAND / “Knock With Me – Rock With Me”

Ten years from now Where will I be? Will I be shining like a star Bright as the eye can see? Or will I can be kicking the breeze Hanging on St. Phillip street? —Glen David Andrews in 2001, from the Lil’ Rascals Brass Band’s “Knock With Me – Rock With Me” “What the fuck you writing, man? I live in a trailer.” —Glen David Andrews in 2008, talking to an NPR reporter who was attempting to do a story about Glen’s cousin, Troy ‘Trombone Shorty’ Andrews 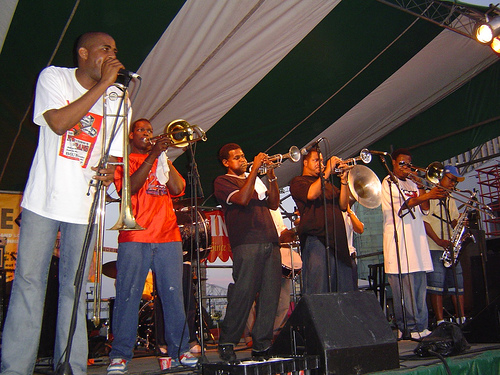 I wanted to include this one because “Roll With Me” is actually not the norm for New Orleans brass band music. “How You Gonna Tell Me” is better at showing the ability of the Rascals to sustain the level of excitement through an entire instrumental piece. The thing you have to know about New Orleans street music is, it MOVES. That’s not a metaphor – the bands literally move. Except when they’re doing club gigs, the brass bands usually walk around while they’re playing. They’re usually not in one place, or playing to one audience, long enough for extended vocal pieces to make sense. That’s actually one of the reasons “Roll With Me” is unusual: the vocals are basically central to the record. But while “Roll With Me” is the classic, “How You Gonna Tell Me” is more representative of what our street music sounds like when it’s actually played live in the streets. 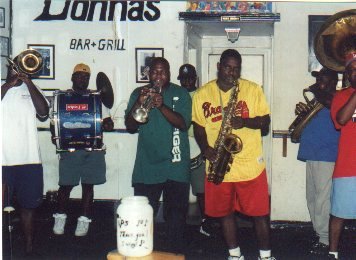 New Birth’s tribute to Glen David Andrews’ cousin, Darnell Andrews. New Orleans brass bands are very competitive with each other but they’re also very intertwined in terms of membership and family relationships. I don’t have either the time or the knowledge to unravel the many connections between New Birth, Lil’ Rascals and The Hot 8 (another brass band I’ve heard playing “Roll With Me”), but there’s a lot of overlapping.
* * *
A note about the download. Usually, the tracks we make available for download are converted at a 192 bit rate (or at least at 128) which is sort of the standard for a good, listenable MP3. But since my copy of Buck It Like A Horse is in storage in New Orleans, I don’t have a clean copy of “Roll With Me” to post. The one I found is converted at a fairly low 96 kbps. I don’t feel bad about that though, because the Lil’ Rascals are homeboys. If you like “Roll With Me” and wish you had a cleaner copy, buy the record!
* * *
Oh, um. I see y’all are still here, standing on the corner looking all confused. Tell you what. Since it’s about to get dark, if you don’t meaning paying a little extra, I wouldn’t mind giving you a ride back to Canal & Claiborne. You can walk back to your hotel from there. I have to pass through there on my way home anyway. 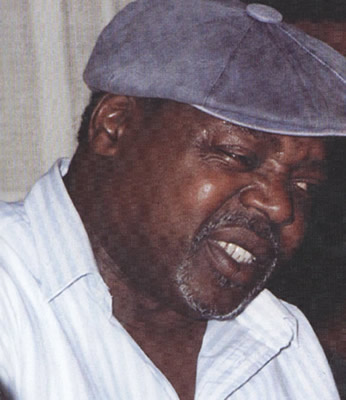 P.S. For those unfamiliar with the culture, “It Ain’t My Fault” (from Smokey Johnson It Ain’t My Fault) is a classic of New Orleans street music. It was written by Smokey Johnson, better known as Fats Domino’s drummer. (Actually Smokey was Dave Bartholomew’s drummer and Dave was the bandleader, producer, song writer and all around Mr. Everything behind Fats Domino—hey that’s the way it go in New O, you can’t tell what’s happening on the inside if all you see is the outside.) Anyway, the song initially had a strong modern jazz combo flavor. Then the brass bands picked it up and made it an all-time classic of New Orleans culture in general. As in, when some mess started and you had nothing to do with it, you would simply say, "Nooooo, it ain’t…." 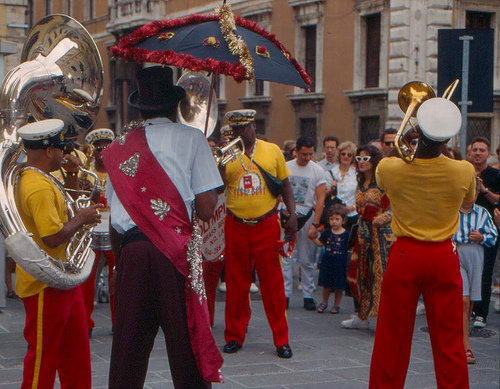 So, in addition to Smokey’s original sixties recording, I’ve put Olympia Brass Band doing “It Ain’t My Fault” street style (from Best of Jazz Fest - 1988, referring to the annual New Orleans Jazz & Heritage Festival). The thing to notice is that the original song starts off with a drum riff played on a drum kit but when it moved to the streets, the beat is now played by the traditional two-drummer brass band rhythm section: one person on bass drum and cymbal, the other on snare drum. Additionally, a vocal refrain is added that almost every New Orleans child knows by heart. Ok, that’s it.

This entry was posted on Monday, June 2nd, 2008 at 12:13 am and is filed under Contemporary. You can follow any responses to this entry through the RSS 2.0 feed. You can leave a response, or trackback from your own site.

I think you missed the connection between "Roll With Me" and bounce music. To me, that is probably one of the reasons this song is a classic – because it basically is a bounce second-line song. Put on any bounce record and you gon’ hear all the wards called out (like he did), put on DJ Jubilee’s music and you will hear "Who that call the police?", "I don’t know what you been told, but I love them project ho’s". There are MANY similarities between this song and a bounce song – matter of fact, if you take out the brass band behind Glenn David Andrews and put the two "Trigger Mans" behind him, it would probably be a bounce hit.

Tuta, you make a good point. But once you bring that up, you have to explain what bounce is. And who Jubilee is.  And what "Trigger Man" is. Etc. There might be five to ten people reading this who have any idea what you’re talking about.

i bet anyone who takes the time to read all this is gonna know the basics of bounce. i thought everyone knew who jubilee is.

Fascinating and wonderfully written breakdown of “Roll With Me”! Thanks!

If you are going for most excellent contents like myself,
just pay a quick visit this website daily as it offers
quality contents, thanks

Hello colleagues, its wonderful piece of writing regarding teachingand
fully explained, keep it up all the time.