“In my life the only places I really felt secure were in the music and in the Lord.”
—Nneka 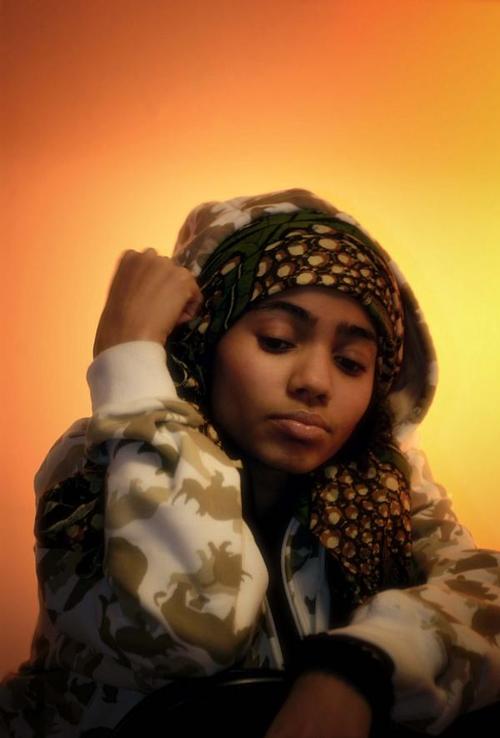 There is some hip shit coming out of Nigeria via Germany. Last year (here and here) we featured Ayo and the year before (here) it was Zoe, who is Liberian/German. Not to mention all the Joy Denalane (South African/German) we been dropping (here, here, here and here).

This year get ready for Nigerian born Nneka who now lives in Hamburg, Germany. Born Nneka Egbuna in 1981 in Warri, Nigeria, which is a small town in the southeast Niger delta region. At age 19 she emigrated to Hamburg, Germany ostensibly to study anthropology.

"My father is a very strict man," she says, "and he brought us up in a very disciplined way. I was a very conscientious student. I did well in my A- and O-levels back home, and applied to study economics and accountancy at university. But then something happened – I can't talk about it – and I made the decision to move to Germany." Now Nneka is enroled at Hamburg university, studying anthropology. "By the grace of god I'll be finished in a year's time. When I've finished, I want to give myself to music 100 per cent. But I need an alternative if this doesn't work out."
—Nneka 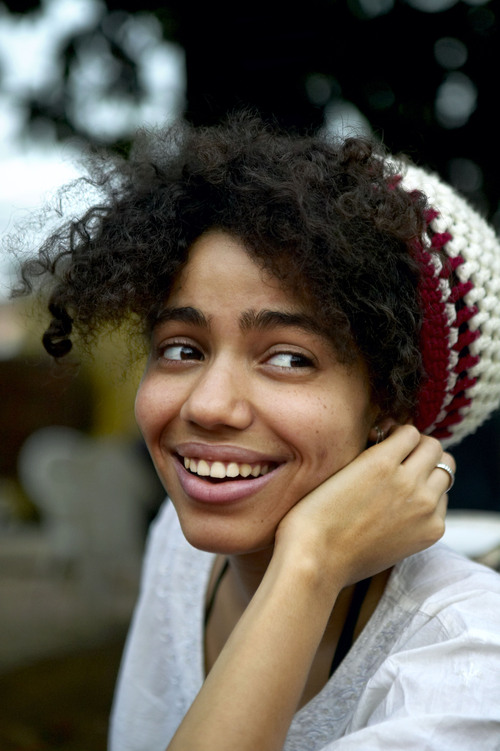 Today she laughs about her early days in Germany. She was fired from her job as a clerk in a Footlocker store on the first day. After loosing a second job, she found semi-permanent employment with a cleaning service, primarily cleaning toilets starting at four in the morning before going to school and “sleeping in class but it was really inspiring seeing shit everyday (she laughs).”

In Nigeria she sang in church but never pursued a professional career as a singer until coping with the culture clash of being in Germany song began pouring from her as though she had taken a purgative. 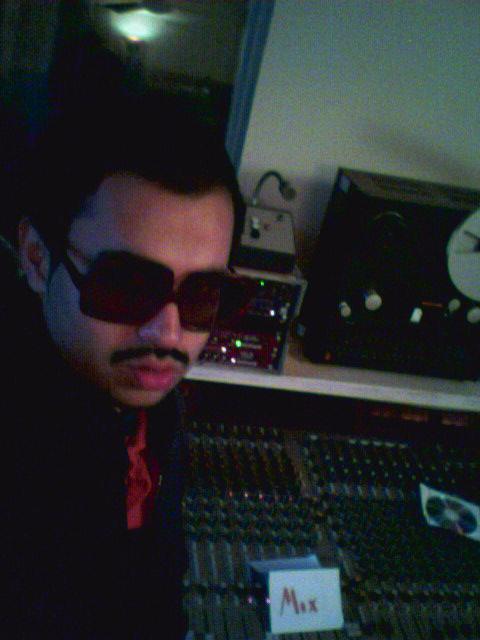 She hooked up with DJ Farhot and they formed a partnership. In 2005 they produced a five-song EP, The Uncomfortable Truth, which brought her to the attention of major labels in Germany. By the end of 2005 she had produced a full length debut, Victim of Truth, from which a series of singles was released (“The Uncomfortable Truth,” “Beautiful,” “God of Mercy,” and “Africans”).

In 2008 Nneka released her second full length, No Longer At Ease with it’s lead off single “Heartbeat.” “Heartbeat” was her first record to break into the German Top 50. 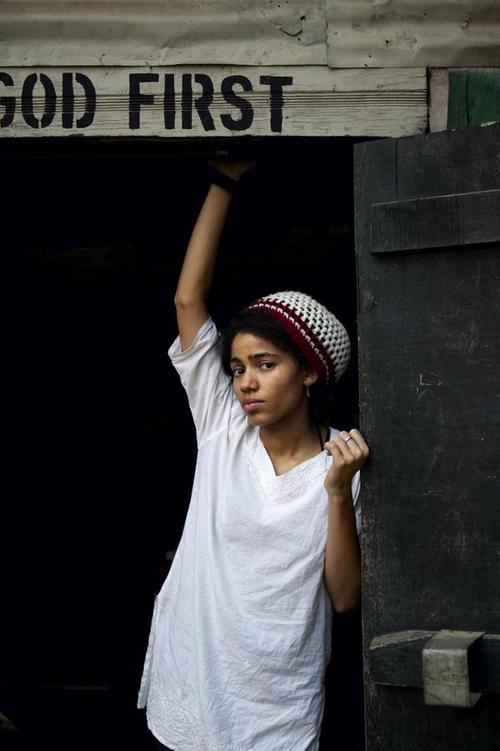 What strikes me most is her warrior stance mixed with her forward Christian spirituality. One interviewer couldn’t get past Nneka’s deep belief in God, which, after all, is not Nneka personal problem except others might try to make it a problem.

I am more interested in how Nneka is handling contradictions and her drive to openly confront contradictions in her lyrics. For example “Halfcast” deals with self-identity issues around being light-skinned even though born in Nigeria of Nigerian parents (her mother is half-German). “Africans” is a critique of African political leadership.

A number of the songs have personal specifics embedded within a description of common relationship issues. Refreshingly, Nneka does not exempt herself. Referring to The Uncomfortable Truth, Nneka opines: 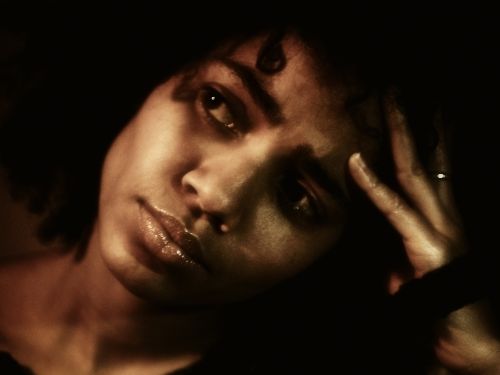 Many of us are very hypocritical. We just want the fame, the limelight, the attention…  That’s the lie I’m talking about. That’s why I am forced to speak out. I caught myself many times being a hypocrite. I decided to admit to myself that I was a hypocrite and confess to myself on that album.
—Nneka

Four or five years ago I was invited to join 99 other writers and submit a poem for a 2005 anthology in honor of Ken Saro-Wiwa, the Nigerian writer who was executed by hanging as a result of his activistiam. The anthology is Dance the Guns to Silence: 100 Poems for Ken Saro-Wiwa.

On November 10th 1995, Ken Saro-Wiwa and eight Ogoni colleagues were executed by the Nigerian state for campaigning against the devastation of the Niger Delta by oil companies, especially Shell and Chevron.

In 1990, Saro-Wiwa started to dedicate himself to the amelioration of the problems of the oil producing regions of the Niger Delta. Focusing on his homeland, Ogoni, he launched a non-violent movement for social and ecological justice. In this role he attacked the oil companies and the Nigerian government accusing them of waging an ecological war against the Ogoni and precipitating the genocide of the Ogoni people. He was so effective, that by 1993 the oil companies had to pull out of Ogoni. This cost him his life.
—Remember Ken Saro-Wiwa website 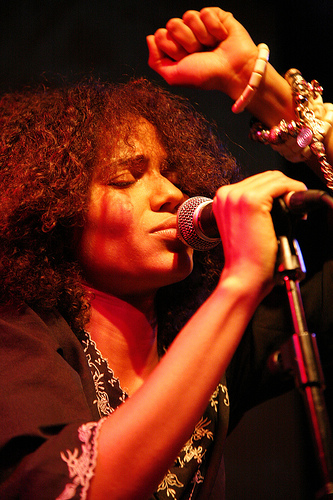 As I listened to Nneka I thought I heard references to the situation in the Niger Delta region. And then, man, when I saw some of her performances and heard her declaim head-on this situation and realized that she is from that region and that she continues the struggle, I knew I had to support her efforts regardless of whether I personally liked or disliked a specific song.

On the Remember Ken Saro-Wiwa website there is a description of Nneka’s participation in the 2005 memorial event in London.

The main act was the Nigerian superstar Nneka, whose incredible voice filled the night sky with her heartfelt lyrics. Nneka’s range of acoustic tunes is delivered in tender, soulful melodies and uplifting RnB, making her an instant crowd-pleaser. Her personal experience of the hardships of life in the Niger Delta and her humility left the audience moved and captivated.
—Remember Ken Saro-Wiwa website 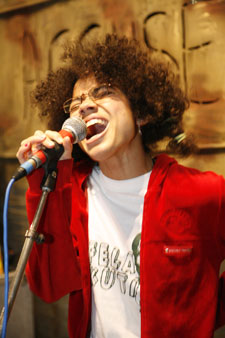 Nneka singing beside the Living Memorial. She spoke from experience about life in the Niger Delta. Photo: Martin LeSanto-Smith

Turns out I like a lot of what she is doing even as I recognize that she is in the early stages of her development as an artist. But what she has that advances her art is the heart to embrace Ken Saro-Wiwa’s credo:

So Nneka and I in our blood and behavior share the aesthetic of artistic activism. I respond to that political kernel in the centre of her work, that desire to honor the past by struggling in the present to create a better future or, as the Remember Saro-Wiwa website proclaims: remembering the past, shaping the future.

“I’m not here to entertain. I’m here to speak my mind because I am no longer at ease with the situation”
—Nneka

“I do not see myself as a performer but as somebody who shares her heartfeelings with others. I have fortunately, by the grace of God, the opportunity to sing my message to you on your stages. And if the media supports it - fine! This is an advantage for something I feel the world needs.”
—Nneka

This is not music made for relaxation. I know we all need to cool out from time to time but the natural fact is, especially here in America or the west in general, we spend an inordinate amount of time chilling and very, very little time directly confronting social issues. 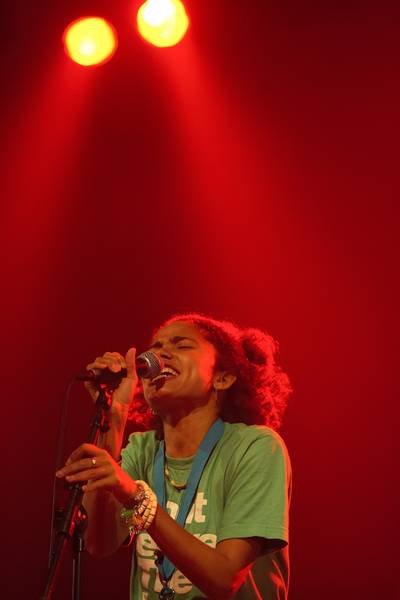 What inspires us, motivates us to move, to change behavior, to challenge the system? I don’t put it all on art to do that. Nor do I believe all art must do that. In fact, much of what needs to be done is not art at all but rather are political, social and economic endeavors.

I get inspired when I take a severe look at the things going on in our world today; especially in my country. How people live, suffer and endure pain, politicians and religion. And when I see all that man has evoked and created out of self-centeredness and devotion to material things.
—Nneka

Artist should be free to create whatever art they wish. At the same time conscious artists ought to be embraced, encouraged and critiqued within a circle of love, not just accepted on an "anything goes because they are conscious" tip. 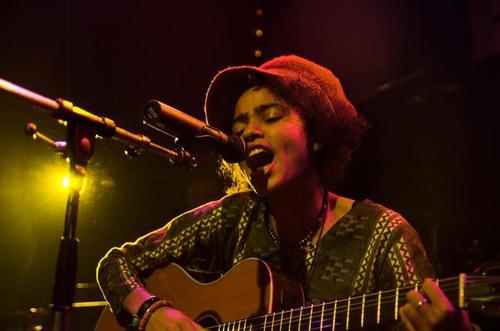 Musically Nneka is still shaping her direction. She started merely five or six years ago and is only now getting to the place where she can afford to put together a stable band. Her next project will tell the tale. I was more impressed than I thought I would be with what she does live. Big question can she find a way to project her intensity and energy in the studio and get it well recorded?

The last track in Nneka’s set in this week's jukebox is “Focus” which is done in a German television studio as a duet with only guitar accompaniment. Go here to watch Nneka perform "Focus." The power this little woman pushes forth is incredible. Also check the range of her voice. Rap-wise she is not fully flowing yet, there were a couple of short stumbles. But check it for yourself and draw your own conclusions.

This entry was posted on Monday, January 5th, 2009 at 6:31 am and is filed under Contemporary. You can follow any responses to this entry through the RSS 2.0 feed. You can leave a response, or trackback from your own site.

Wow, great article. this is the first time I have hear of Nneka, and I am about to listen to an interview with her on BBC 1Xtra.

I’ve been a fan of Nneka for almost two years, and I like her even more now that I know she creates music with purpose and obligation to inform the world. I hope she goes far and her music reaches the ears of those who are ignorant to the issues facing us. Loved the article as well.

I was blown away the first time I heard Nneka. She truly defines what am artist should be.Her veiws and spiritual faith in the Most High are inspiring. I would like to work with her or bring her to the US to do a show. She needs to be heard!