ANGELA BOFILL / “Under The Moon And Over The Sky”

Usually, I write about an entire album or about a group of related songs but for this week’s classic I want to talk about just one song. It’s Angela Bofill’s “Under The Moon And Over The Sky” – one of the best pop vocal performances I’ve ever heard. The arrangement’s not half-bad either. 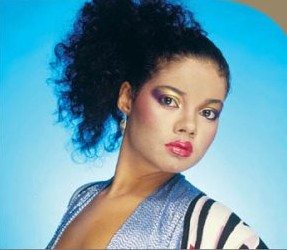 Before getting into the song itself, here’s some quick bio info on Angela. I knew she was from New York and I’d always assumed she was black. Well, she is black (obviously) but not in the way I thought. She’s actually a black Latina – according to Angela’s website, her father is Cuban and her mother is Puerto Rican. Born in the Bronx, New York City on May 2nd, 1954, Angela Bofill studied music throughout her early years, eventually becoming a classically-trained pop and jazz singer with a three-and-a-half octave vocal range. After a string of successful pop/jazz albums in the late seventies and throughout the eighties, Angela’s career as a recording artist fizzled, but she continued to perform successfully around the world until 2006, when she suffered a stroke that left her paralyzed on one side of her body. Angela recovered and began to perform again, even recording a well-received live album on her own label, Black Angel Productions. (The album, Live In Manila, was recorded before a rapturous Filipino audience; apparently, Angela is big in the Philippines – who knew?) Tragedy struck twice however and in 2007 Angela suffered a second stroke, one from which she is still recovering. If you’d like to support Angela Bofill’s recovery you can click here  to buy the live album, all proceeds from which go to Angela, or you can donate directly by going to her website. So that’s the back story. Let’s talk about this record. 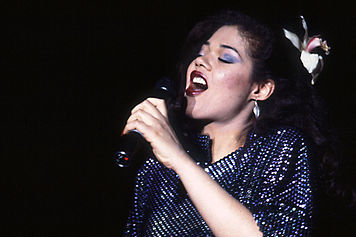 From the first line (“like the wings of a bird”) it’s obvious we’re listening to a singer in complete command of her voice. Angela sings the line with both power and grace – she’s strong enough to overwhelm us but skillful enough not to. I also dig the way she luxuriates in each word, gently bending the notes, letting her voice rise and fall so that ‘wings’ ends up sounding like it’s three syllables instead of one and ‘bird’ sounds like at least two. I’ve read my favorite singer, Marvin Gaye, comment that it’s harder to sing softly than it is too sing loudly. If that’s true, Angela is working her behind off on this record because over and over she ends her phrases with long gentle notes so delicate that it’s sometimes hard to tell they’re even there. Each time Angela hits the refrain (“under the moon and over the sky”), it’s thrilling to hear the way she almost cuts loose but never really does, giving you the feeling that there’s a great deal of fiery passion just below the smooth, easy surface. Soon, “Under The Moon” arrives at the bridge and we get the first hint of Angela’s famed vocal range. “The universe is waiting for you,” she sings, and she makes the ‘for you’ tangy and bittersweet, singing it high enough to get us to sit up and take notice. At the same time though, she sings it with enough straightforward poise that it’s obvious she’s nowhere near her limit. For the rest of that stanza, Angela is a graceful bird soaring across the tops of the trees. She stays right there in the mid-high range, not flying particularly far or fast; she’s just stretching out her wings, letting the wind currents carry her where they may. Two minutes in now and the arrangement takes off with an intriguing Latin-esque break (one made more understandable and meaningful once we take into account Angela’s personal background). There’s flute and percussion, a twisting and wandering fundament of a bassline, Spanish vocals from a chorus and some high-pitched animal and bird noises from Angela – beautiful, beautiful stuff. The break leads straight into some of Ms. Bofill’s elegant scatting and then we’re back where we were, back to the top. This time, when Angela sings the first line, she takes us a little higher, it’s still appealing in that delicate, bittersweet way, but now there’s a little vertigo setting in too. If you’re not used to flying high, it’s breathtaking in both senses of the word – as unsettling as it’s thrilling. As we get close to the end, Angela repeats the refrain several times before dispensing with lyrics all together, giving us a wordless version of the main melody. Along the way, she hits the highest notes yet. We’re way up above the treetops now, the clouds just above us. She repeats the refrain one last time – “under the moon and over the sky” and then, at last, she gives us what she’s been hinting at for the entire record. Angela takes us with her waaaay up, lifting free with a spine-tingling series of notes so high that only a handful of pop singers would even attempt them. We’re up where there’s no sky anymore, nothing to hold onto, just the steady glow of the moon, the twinkling of far-off stars and that divine voice carrying us along.
* * *
Bonus track: Angela’s excellent cover of Roberta Flack’s “This Time I’ll Be Sweeter.” Both “Sweeter” and “Under The Moon” are from Angela Bofill’s 1978 release Angie. —Mtume ya Salaam             Not Quite Enough               Mtume, I dig where you’re coming from selecting these two cuts but (and you know there had to be a but), I can’t listen to Angela without hearing “I Try.” Talk about a pop classic. 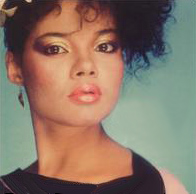 My generation grew up on slow dragging—and by that I mean a lot more than a simple slow dance with any girl who happened to be nearby when “that” song came on. Nor do I mean “grinding” on that chick from round the corner two blocks over who was fine as shit and who everybody was fiending to slow dance with on account of how fine she was. No, I’m not talking about none of that back street variety of teenage lust. Angela’s Bofill had a deeper appeal. This song was the declaration that most cats never dared publicly acknowledge had crossed their lips but which that special someone had heard not only whispered in her ear but had also stood, leaning against the fence after the football game when man-child had mustered up all the courage contained in his soul to declare: as soon as we graduate, we gon get together and everything going to be everything and I swear I’m going to try with all I got to make it all come true. Angela Bofill’s song is the soundtrack for that moment, and so instead of gripping her in a modified bear hug and locking pelvises and doing the kind of twist Chubby Checker didn’t dare do on American Bandstand, instead of that (as pleasurable as it was), what happened was the first real male to female tenderness that ever happened in all eighteen (well, as of next week it will be eighteen) years on earth. There was something about that song that captured the whole raw outpouring of unrequited love feelings, 'cause this was not only the first real love, this was also the first real heartbreak; the first time not understanding how giving your all, for some stupid, unfathomable reason, could not be enough. Angela said it in that song. Angela sang all that bitter teenage angst like as if she had a copyright on it. And then she (this special young lady) would remove your hand from her upper butt, back off a step or two, shake her head slowly, real slowly, “no…I can’t…” and leave you standing there in the middle of the floor or wherever it was when she told you “no” with a crushing finality that would last a lifetime because though the heart would heal, the hurt would never entirely go away. “I Try.” It’s a classic song describing a classic situation. Tragic but classic. Sad. But classic. That’s the Angela Bofill I’ll never forget even when I don’t actively remember the song. All that has to happen is the first few notes rise up and I’m right back there confused as a motherfucker, trying my best to understand why my best was not good enough. —Kalamu ya Salaam

This entry was posted on Sunday, August 24th, 2008 at 11:58 pm and is filed under Classic. You can follow any responses to this entry through the RSS 2.0 feed. You can leave a response, or trackback from your own site.

I agree with you Kalamu on the “I Try” song. Couldn’t hurt to check out Will Downing’s version of this song. Probably gives Angela’s version a run for the money!!!

I had never heard of her before. The Style is reminiscent of a jazz-percussion-woodwind-opera-like fusion, not at all dissimilar from the music made popular by Andreas Vollen Weider, well at least this song audibly feels like that to me.

Thanks for the very interesting listen.

Interesting discussion on this beautiful song. I had never head of Ms. Bofill till two weeks ago, when I heard “Over the Moon…” in Starbucks of all places. I loved it, so asked the assistant for the name of the singer and song. It came from an inhouse compilation they were using. The song sounds so fresh that I assumed she was a new artist–what a surprise to learn it was from 1978 and one of her earliest recordings. A major talent, a gorgeous song. (She is no longer singing, but is touring in a show, apparently, as os 2011. After her stroke, she can no longer walk but can talk. She tells her life story and another woman sings the songs. Sounds like one courageous lady to me.)

Those were real vocalist with a real agenda and purpose to there singing which captivated an appeeal of a real heartfelt love songs.They do maje them like angela bofill nor phyllis hyman i would know i waas one of her percussionist. She was gorgeous and too talented my boricua sister. I love you much..

Love Angela Bofill, Listening to the record album Angie. On the A side love Under the Moon and Over the Sky. On the B side love Summer Days. And yes, Will Downing’s Version of “I Try” is so good and so is Angela’s Version. Thanks for posting an awesome article!

I was so young when this came out. I forgot about it and then the opening line had me again. SMH. Beautiful. You can tell she was classically trained. Wished we had more quality music like that now.

Under the moon and over the sky is a beautiful art piece. When I play this song, I am lifted( like a bird in flight), like a angelic being returning back home to Yah. So many visions of perfect peace enter my mind. With the afro-Latin beat that gresonates as the tune crescendos thru the break I feel the her strength as a proud black queen that everyone stops to adore. This tune goes down in history as one of the great ones. Bless you Angela.

[…] guys from the “Kiss of Life” state it best: There was something about that song that captured the whole raw outpouring of […]

Please, if anybody can help me obtain the Piano/Vocal sheet music or transcription in lead sheet form of Angela Bofill’s song called ” Under The Moon And Over The Sky,” I’d be extremely grateful.”
I’m not having any luck tracking it down and I really must have it, ASAP!
A nice precise PDF of this beauty would really make my day. I’m willing to
send payment if the music is accurate and complete, also! Again, please
direct me to how and where I can get this song now. Thank You! George.