I think it is essential to keep the world in perspective. I think that music is the best platform to do that. Music is incorruptible. Music is about humanity. Everything else is so polarised or politicised by the kind of madness that is going on with the American Government, and all the corruption that is going on across Europe with politicians. So I feel that you have to force out a statement for the human being, and I think that music is a real place of balance. You can hear if someone is lying to you through music. You can hear if someone is being genuine because it is a language of the soul. It’s a language of emotion. Whereas when people use words, they can quite easily manipulate people’s thinking, and that’s what politicians do, so I think that music is a great way forward. People have used it time and time again, and you only have to look at how important it was in South Africa to a lot of musicians who protested against apartheid, or look at people like John Lennon, you know it goes on. The way people state their identity from Public Enemy to James Brown to people in the civil rights movement. I think music has always played an essential part in actually exposing the hypocrisy of politicians.
—Nitin Sawhney 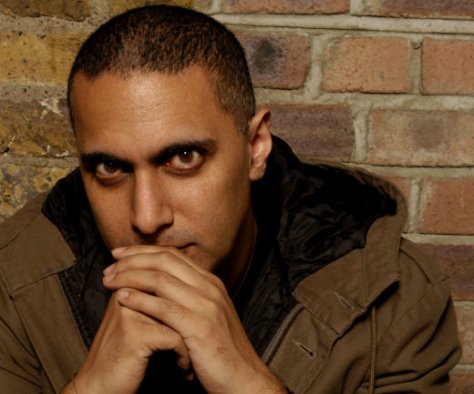 Nitin Sawhney is a citizen of the world, un-caught-up in the desire to boil his identity down to ethnic essentials. For him it is enough to be human and to sincerely respond to humans and human expression from where ever those humans and their cultural expressions emanate. Probably, it is his love of music that so situates his thinking, his being.

Translated into political terms, such thinking, such ways of walking through the world inevitably aligns Nitin with the anti-establishment forces regardless of what particular establishment is asserting its alleged authority. You can hear it in his music which is catholic (with a small “c”) and mongrel in a non-pejorative sense, i.e. it proudly mixes diverse elements into itself.

But there is more. Nitin’s music also has a cinematic quality, modern cinema at that. Scenes shift. Cuts from one sound to another, one emotion to another, building in the mix an emotional tidal wave that engulfs the listener. One minute you are considering something so-called foreign, the next it is your own heartbeat you are hearing in some musical phrase Sawhney has composed.

This music is both all encompassing and all embracing; everything is in it and you can feel all of yourself in it. Certainly the music of India is forward in the mix but then there is the flamenco, and the R&B/soul elements, the dance club mash-ups. Part of it is because Nitin uses so many, so varied a cast of vocalists. Voice is identity and clearly here so many voices are represented. A true polyglot music. 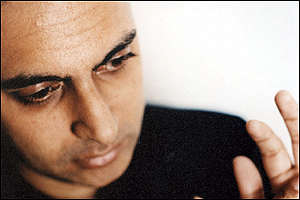 Nitin comes by his outlook honestly.

My mum was a Bharata Natyam dancer and that is a form of Indian classical dance and she has actually written a poem in Hindi that I have used on [one of my albums]. Also my brothers used to play a lot of music, my middle brother used to play a lot of guitar and I think that had an influence on me but I also think the music that was played in the house had a big impact on me. My dad used to play a lot of Cuban, Brazilian and flamenco records, My mum played a lot of classical Indian music and my brothers played a lot of jazz, funk, soul and also a lot of rock like Led Zeppelin, The Doors and stuff like that. It was a really varied mix of influences that I had from everyone.
—Nitin Sawhney

The critical difference is that the influence was not just the passive of what he heard but also the active of what he learned to play.

I used to play with every band that I could, you know from Punk bands to Rock bands, to funk to jazz to whatever. I was constantly just playing, so I just grew up completely nuts about music. Then after that I just got into production and making all those sounds fit together, so that’s what led to the albums really.
—Nitin Sawhney

Nitin Sawhney is a master architect of fitting sounds together into an aural structure of beguiling, beauteous and majestic proportions. I am particularly strong on Beyond Skin, his 2000 release on the Outcaste label. So many read this as a paean to his Indian heritage but while it certainly draws deeply on Indian culture the emotional thrust is not on moving closer to India but rather on the process of moving from India out into the world and on India’s own mixed-blessing of embracing modern technology, specifically nuclear weaponry.

in reality, nationality is meaningless and yet it’s used as a big hammer to beat people into submission. patriotism is what the neo-conservatives thrive on, a culture of fear. bush has linked good and evil with nationality, if you’re american you’re good and if you’re from the middle east you’re probably evil. he has cleverly made those associations in peoples minds and brainwashes them into accepting complete inhumanity to other people. at the moment there are 25 million people starving in ethiopia and yet if there were 4 american or british soldiers killed it would make world headlines. so the message is that humanity is not respected over nationality or power.
—Nitin Sawhney

This is the foreigner’s story, the immigrant’s story, the alien’s story but it is also an interrogation of the center, the status quo, the new nationality that the outsider is joining. It is an intense and sophisticated consideration of the conundrums affecting millions and millions of people in the formerly colonized world who are engaged in the attempt to untie the Gordian knot of development. Alexander used a sword to sever the cord rather than unravel the problem. Nitin Sawhney uses computers and a cusinarting of diverse culture to produce his own solution. 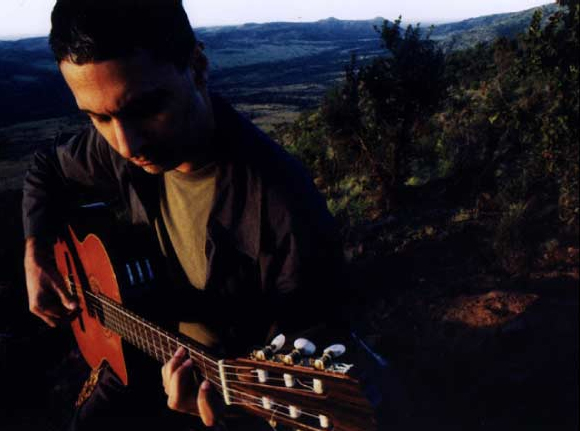 This is the soundtrack of the outsider producing a new identity inside themselves, an identity that is neither new nor old but rather is eternal. How shall we call ourselves, be ourselves? What shall we hold to, what shall we reach for? Eternal questions with answers that are relative rather than constant.

Sawhney’s music is a gift of seminal importance. In showing us himself, he gives us an example of how we can become ourselves. Listen to the music with an open ear, without the prejudice of taste preferences causing one to spit out the unusual.

For me, the Roman-enslaved African writer Terence said it best: there is nothing human that is foreign to me. Within the sphere of musical culture, Nitin Sawhney is an advocate of Terence’s philosophy.

In addition to six tracks from his masterpiece Beyond Skin, I have included two non-album tracks that give a glimpse of Nitin’s breadth. Here are two versions of “Sunset.”

The first version is from an October 2001 concert at Paradisco in Amsterdam. Go here to see a video of the entire fantastic concert. American born Jhelisa and Bengali vocalist Jayanta Bose are the dual features on this number and once again, as is the norm for Nitin’s music, two different cultures are juxtaposed in the lead voices. Jhelisa sings in English employing her unique Soul Music style. Meanwhile, Jayanta does his thing deep into the Indian musical tradition. Although I don’t understand it all, I appreciate every minute of the song.

The second version, a MJ Cole remix (available on All Mixed Up), is instantly recognizable as a club rave. The featured vocalist is Eska Mtungwazi (Zimbabwe born/London reared) riding atop a brutally upful bass & drum rhythm. Nitin is awfully consistent in not being pigeon-holed. He is a world-class DJ, a popular touring artist, a composer for symphonic orchestra, an in-demand film scorer (his latest is the soundtrack for Mira Nair’s beautiful and sensitive Namesake) and one of the major producers of 21st century recorded music.

This introduction is simply that, an introduction. If you like what you hear here, I encourage you to go further. Nitin is a brilliant chef of world conscious culture.

I think it's about time I picked up the entire Beyond Skin album. I've heard several tracks from it and I like them all. My favorite one used to be "Homelands," but now that I'm hearing "Tides," I might have to change my mind. It's absolutely gorgeous. Although how Kalamu justifies digging this smooth jazz-ish piece is beyond me.

In general though, I agree with Kalamu on this one. Nitin is a very talented assimilator and practitioner of various musical sounds and cultural impulses. He's also a talented instrumentalist and bandleader. I've seen him live on stage and while he may specialize in modern electronic music, he's also a true musician in the old school sense of the word.

P.S. I wish that Jhelisa performance had better sound quality. I've seen that performance on video - it's incredible. The lousy audio doesn't do it justice.

This entry was posted on Monday, April 21st, 2008 at 1:09 am and is filed under Contemporary. You can follow any responses to this entry through the RSS 2.0 feed. You can leave a response, or trackback from your own site.