1939. A very important event in jazz history. Coleman Hawkins cut a version of “Body and Soul” that established the song as the leading jazz ballad for instrumentalists. From Louis Armstrong and Lester Young to John Coltrane and Pharoah Sanders, nearly every great jazz musician has taken a turn at blowing “Body and Soul.” The song is also the archetypal torch song, a staple with singers that range from lounge acts and pop stars who want to demonstrate their range, to hardcore jazz vocalists such as Billie Holiday, Ella Fitzgerald and the singers featured here. It is unusual to find a song that both instrumentalists and vocalists favor. 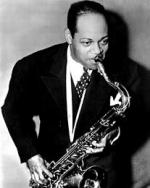 Coleman Hawkins' 1939 recording is often credited with establishing the tenor saxophone as the major instrument of jazz. Before Hawk, jazz was trumpet dominated, thanks in no small part to Louis Armstrong. Although it simply sounds like a regular jazz song, Hawkins’ version was a startling and innovative recording at the time of its release. For one thing, the majesty of Coleman’s sound was captivating. His burly, rough hewn tone would be the dominant sound of the saxophone until the advent of Lester Young. Secondly, while most instrumentalists favored embellishing the melody, Hawkins built his solo on variations based on the harmonic structure. Although at that point bebop was a number of years off, Hawkins reading of the standard prefigured the bebop approach. 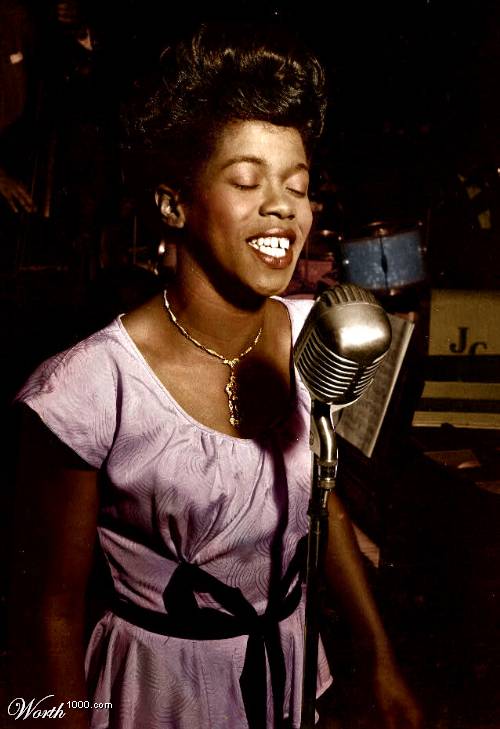 At least several hundred singers have taken a turn at “Body and Soul.” Few have approached the song with an instrument equal to the "Divine One," aka Sassy Sarah Vaughan. Flawless over four octaves, she ranged from baritone to soprano. But beyond the beauty of her voice there was the incomparable artistry of her phrasing. A trained pianist who held down the keyboard chair in the Billy Eckstine Orchestra, when it came to improvising, Sassy was wings compared to the plodding feet of most vocalists. Even though Sassy could emote with the best and could whoop and holler, she became the progenitor of the style of singing that became known as “cool.” Sarah’s expert backing trio of Joe Malachi on piano, Joe Benjamin on bass and Roy Haynes on drums offers sterling support. 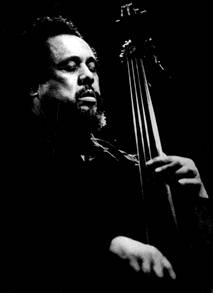 On the instrumental side, “Body and Soul” became a favorite for swing musicians who combined melodic variations with strong rhythmic accents in their playing. The Charles Mingus version illustrations this trend in spades given that the two main soloists are trumpeter Roy “Little Jazz” Eldridge and saxophonist Eric Dolphy. Eldridge plays with a blustery, broad tone that is drenched in blues tones and connotations. This epitomized a Louis Armstrong-derived, swing approach. The pyrotechnics of bebop replaced swing. The major improviser of bebop was alto saxophonist Charlie Parker. Dolphy’s dazzling technical proficiency superbly mirrored Charlie Parker’s sound and approach, and in the second half of Dolphy’s solo, Dolphy gives us a taste of the oncoming avant garde. It would take a forward-thinking composer and bandleader like Charles Mingus to give us strong examples of both the way things used to be as well as the sound of the future all within one performance. 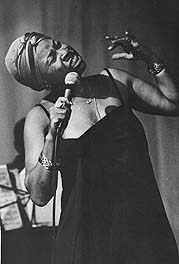 Betty Carter represents the masterful sound of young musicians who grew up on bebop but swang in a cool style. Betty and her trio (Norman Simmons on piano, Lisle Atkinson on bass, and Al Harewood on drums) do the near impossible: they swing hard, hard, hard at a very, very slow tempo. And on top of that, Betty takes to an even higher level the bebop penchant to quote other songs while improvising. In a moment that is both profound and comic, Betty segues seamlessly from “Body and Soul” to another standard “Heart and Soul.” It’s a brilliant interpretation taken from Betty Carter's album, Finally. 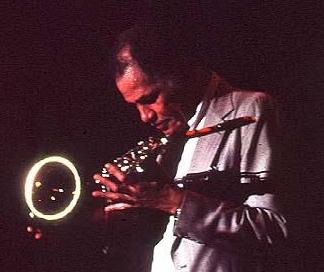 The hard bop movement that followed bebop is exemplified by Dexter Gordon and his Coltrane-influenced version of “Body and Soul.” Gordon borrows a chord sequence and rhythm pattern from Coltrane who introduced a new way to play “Body and Soul” on one of Coltrane’s most famous albums, My Favorite Things. Even though Gordon was older than Coltrane and had also served as an influence on the younger musician, Dexter charges out the gate and produces a long, 17-minute performance. Coltrane had popularized quarter-hour and longer improvisations. Gordon’s band of George Cables on piano, Rufus Reid on bass and Eddie Gladen on drums is right with Gordon every second of the way.

Interestingly, Gordon’s huge tone is reminiscent of Coleman Hawkins, but his slow, deliberate, behind-the-beat, lyrical phrasing is a take-off from Lester “Prez” Young, whom Billie Holiday nicknamed “Prez” (short for "president") to honor Young’s position as the leader of a totally different approach to the tenor saxophone. Gordon in his own way combines the past and the future. Gordon even ends using another Coltrane stylistic development when he plays an unaccompanied cadenza as a coda at the end of the selection. 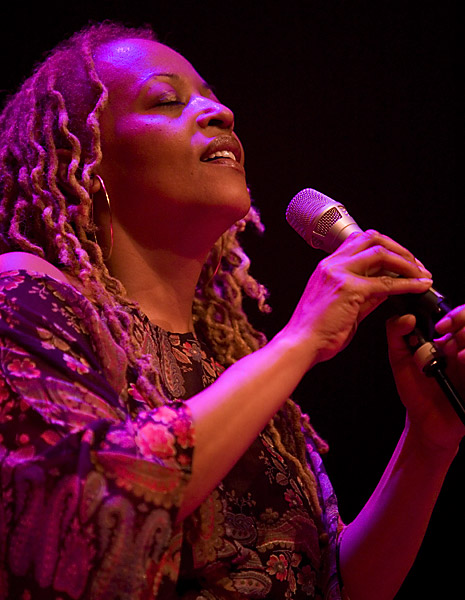 Singer Cassandra Wilson, with a voice as deep as Sarah Vaughn’s and an improvising sense as agile as Betty Carter, also uses a Coltrane approach as a launching pad for her interpretation of “Body and Soul.” Particularly noteworthy is Wilson’s employment of long tones that float over the churning rhythms. At times she even sounds like the clear, high tones of a soprano saxophone, an instrument newly popularized by John Coltrane. Also of interest is the combo format favored by these musicians: lead vocalist or instrumentalist supported by a piano-bass-drum trio. In Wilson case, the band consists of Rod Williams on piano, Kevin Bruce Harris on bass and Mark Johnson on drums.

The final version is the most radical interpretation of all. It's, no surprise, John Coltrane working with a sextet of Pharoah Sanders on tenor saxophone, McCoy Tyner on piano, Jimmy Garrison and Donald Rafael Garrett on bass (Garrett uses his bow throughout), and Elvin Jones on drums. Coltrane’s instantly identifiable tone takes flight atop a bubbling rhythm section that percolates and churns rather than swings. Coltrane veers in and out of the song’s melody like a race car driver swerving through heavy traffic. You can hear the obvious bebop references in McCoy Tyner’s fleet solo, but Tyner also plays peek-a-boo with the song’s structure. The third soloist, Pharoah Sanders, completely jettisons the standard melodic/harmonic basis for improvisation. Sanders focuses on texture and sound as he takes a solo that soars like a bird above the turbulence of rough waters. Although he understands the standard harmonic structure, Sanders takes the Coleman Hawkins approach of multi-note runs to an outward-bound conclusion. Sanders has a big tone akin to Hawkins’ sound but Sanders also has a free approach that is as radical in the Sixties as Hawkins was in 1939. The performance ends with Coltrane offering a summation that includes a brief solo cadenza.

From Coleman Hawkins in the late Thirties to John Coltrane in the mid-Sixties, “Body and Soul” is the chosen vehicle for the expression of innovative, and even radical, variations on traditional approaches to jazz improvisations that end up being classic covers of an American songbook standard that in the process became a jazz classic.

Cassandra Wilson - She Who Weeps


This week's Cover reminds me of Kalamu's great post from August '05, the one on "Summertime." Usually, when Kalamu breaks down a jazz standard, I really like one or two of the versions, I kind of dig another one or two and I could take or leave the rest. But in the case of these covers of "Body And Soul"—as with "Summertime"—I like all of them.

Listening to the way the instrumental versions developed and evolved as the decades passed is like listening to a history of jazz in miniature. And the vocal versions are just amazing. Sarah Vaughan is flawless. Cassandra Wilson is as heavenly as she always is. Betty Carter is a soulful technician—an oxymoron, but accurate, I think.

This entry was posted on Sunday, February 18th, 2007 at 1:13 am and is filed under Cover. You can follow any responses to this entry through the RSS 2.0 feed. You can leave a response, or trackback from your own site.

This is some of the greatest music of our time; thank you for sharing.

I look forward every week to being introduced to new artists and to re-connecting with old favorites. I especially love the Cover section, bringing together diverse interpretations of songs by the masters of our music.

Kalamu, you and Mtume should do a book, accompanied by a boxed CD or DVD set.

Yeah, these renditions of "Body and Soul" are a wonderful expose. And Kalamu is quite wonderful in his exposition of the more technical aspects of the differences. . . . I would like to have had however the names of the albums from which all of the different renditions were taken, but especially the Mingus album.

album links have been added to the end of kalamu’s write-up. glad you enjoy the jazz.

I would add another rendition to the list, one that is interesting because it combines the vocal and instrumental turns. I’m writing of the version sang by Billie Holiday on Songs for Distingue Lovers, notable not just because it was Lady Day but also because Ben Webster gives a warm and delicate saxophone turn in response. This is a latter day Billie rendering hence it leans more towards the emotional than say Sassy’s virtuosity. The same goes when you contrast Ben Webster’s take on his great rival’s tune, it is slightly slower and again the feeling is heightened. Betty Carter’s take is the truth, stunning even among this company.

i agree with you the billie & ben is a great version.

we have two small problems, the first of which may not be obvious.

1. we try hard not to repeat ourselves on bol. although we repeat artists (nina simone the obvious example of that but also marvin gaye), we try not to repeat selections. a while back we featured covers of "do nothin’ til you hear from me." billie & ben were among that number. you can read what we wrote here. the billie & ben cover of "body & soul" is from the same series of recordings.

2. our goal was to use one song to cover the history of modern jazz. as good as billie & ben are, they did not advance the stylistic timeline of jazz significantly in terms of this song. would we drop either sassy or betty carter to include billie & ben. i did not overlook billie & ben, it really came down to a judgment call.

I’m listening as I work (at home). Such a oral “shock” going from the contemporary pieces to the cover pieces. It’s a different world and mind set altogether.

Speaking of Billie Holiday, There is a great group on Yahoo called Billie Holiday And The Disciples Of Swing that salutes the art of vocal jazz. During February they were celebrating Girl Singers Month and this weeks playlist includes several tracks by Billie that were recorded in 1957 at The Stratford Shakespeare Festival. You should check them out. Here is the link to the group and the current playlist:

01 And This Is My Beloved.mp3 Gloria Lynne at Basin Street 912 K

01 They Raided The Joint.mp3 Helen Humes at the Pasadena Auditorium, 1952

03 I’ll Get Along Somehow.mp3 Nancy Wilson

09 But Not For Me.mp3 Gladys Knight

10 Mean Way Of Loving.mp3 Helen Humes at the Pasadena Auditorium, 1952

13 My Funny Valentine_The Gentleman is a Dope.mp3 Peggy Lee and Lena Horne, 1978

17 I Cried For You.mp3 Helen Humes at the Pasadena Auditorium, 1952

19 If I Were A Bell.mp3 June Christy Live At The Dunes

20 It Don’t Mean A Thing.mp3 June Christy Live At The Dunes

22 Too Marvelous.mp3 June Christy Live At The Dunes