Kalamu and I spend a lot of time trying to find music. Sometimes though, the music finds us. Case in point: the other night, I was watching American Splendor. (Decent movie by the way, if you, like me, happen to enjoy sarcastic, cynical and self-referential semi-dark comedies.) The movie is based on the exploits of Harvey Pekar, a lifelong city government file clerk who enjoyed (or should I say, ‘had’) a brief side-career as an author of adult comics. The movie depicts Pekar as a shuffling, mumbling near waste of an individual, but both in the movie and (apparently) in real life, Pekar had excellent taste in music. American Splendor is one of those films that attempts to immerse the viewer in the world of its protagonist. In other words, because Pekar is a compulsive, scattered music lover, the movie is obsessively thorough, follows several main threads at once and, most germane to our discussion, is filled with wonderful music. From beginning to end, semi-obscure jazz and blues tunes play in the background. I say ‘semi’-obscure because I recognize the names of most of the artists, but very few of the songs. In any event, the movie ended, the credits started to roll and I got up from the sofa. Right then, an arresting voice started to sing a song I thought I recognized. I sat back down. 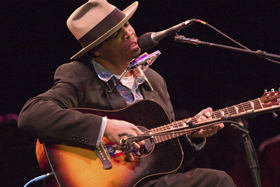 As the song continued, I realized the voice belonged to Marc Anthony Thompson AKA Chocolate Genius, a cat we've discussed previously here at BoL. But what was the song? The lyrics were familiar, but it sounded like Thompson might’ve been putting his own nasty little spin on them. “You do me wrong and I’m crazy about you?” “Each hurt makes my love stronger than before?” I didn’t figure out what song it was until Thompson made it to the chorus. It was Marvin Gaye’s “Ain’t That Peculiar.” How is it that I didn’t recognize one of my all-time favorite singer’s best-known songs? Give the track a spin and you’ll hear why.

* * *
As a bonus, check the jukebox for Brother Marvin giving one of his own songs the ‘Chocolate Genius’ treatment. It’s a live version of “That’s The Way Love Is,” recorded live in 1972 at the just-opened Kennedy Center in Washington D.C. —Mtume ya Salaam             Can You Hear It Now?           Sometimes we have to change (or eliminate) the background in order to fully appreciate the foreground. Great artists are masters at taking familiar material and transforming the tried and true into something bold and new. What we have here are successes at communicating. Small successes with minor songs, admittedly, but important successes nonetheless in that both Chocolate Genius and Marvin Gaye illustrate the power of transformation. Many of you will remember that last week we had technical problems with the jukebox. Some of you may have heard how the songs were distorted because they were playing at a wrong (and slower) speed. When Chocolate Genius’ version started, I immediately thought: something’s wrong, it’s dragging. Even his first phrase “you do me wrong” sounds as though it’s dragging. But this time the drawl is deliberate. Chocolate Genius has made his mark as a pop music eccentric, but here he sounds like a fifty-year-old country blues singer covering Motown with a gutbucket of down home funky two-note blues. I can see him, sitting forlorn in a broken-back chair, maybe two people in the joint (and one of them about to leave). This would never make my list of greatest hits, but I’m glad to have had the chance to hear it. Compare the Chocolate version to Marvin’s vocal track from the original. (This is from a DVD that includes 7 a capella vocal tracks, Marvin Gaye The Real Thing In Performance 1964-1981. Marvin's a cappella rendition has some of that same old-timey feel to it. A mix of the legendary Sam Cooke and Eugene Somebody-or-the-other from Senatobia, Mississippi, singing his heart out at an audition in Memphis, Tennessee. And then we have the Motown production and the song becomes not a blues but an upbeat pop song with a strong backbeat and peppy musical arrangement as well as a chirping female chorus (do-do-doo-da-doooo-ing). This is obviously a made-for-American Bandstand single. But now that we have heard the blues-inflected versions, the song will never sound the same. 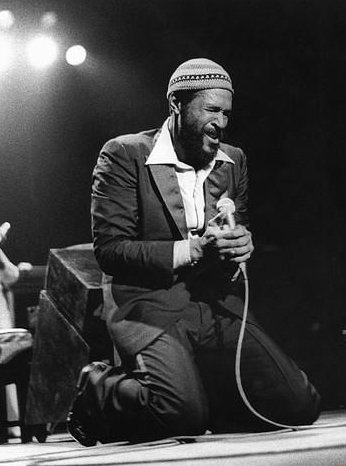 This brings us to Marvin covering himself. “That’s The Way Love Is” was initially a typical Motown production with that pronounced backbeat that even the lamest of no-dancing, sixties, all-American teenagers could snap their fingers to. But in 1972, when he delivered “That's The Way Love Is” in concert, Marvin offered a blues interpretation, clearly emphasizing the downside of love’s joys. Appropriately the selection ends abruptly, just like love too often does. —Kalamu ya Salaam

This entry was posted on Sunday, February 11th, 2007 at 3:52 am and is filed under Cover. You can follow any responses to this entry through the RSS 2.0 feed. You can leave a response, or trackback from your own site.

Tonight, I was flipping the channels and thankfully came across the latest ‘American Experience’ on PBS,  focusing in on New Orleans. One of the folks offering their  in…

Thanks for Nina and Dianne Reeves. All were new to me. I especially enjoyed the Marvin Gaye selections. I had to remind myself that I was working while listening. It was on his music that I learned to dance.

I, too, saw you on American Experience–great comments! Great program! I knew that you would be there. Keep on, keeping on.

“Ain’t That Peculiar” is an extraordinary piece of song writing–quite complex in its construction. Six lines and then a four-line chorus (on which Marvin improvises and extends), with the last three lines (expressing the “peculiar -ality”) almost like the third line of the classic blues lyric. I’m quite bowled over by it.

Where can I find Ain’t that peculiar by Chocolate Genius? I was struck by it at the end of the American Splendor movie and have to have it. It doesn’t seem to be an any of their CDs. I don’t know Chocolate Genuis at all but if his stuff is like this song I’l be loving it all.

It’s not on any of the Chocolate Genius albums but it is on the American Splendor soundtrack. The rest of the soundtrack is mostly classic, swinging jazz. (If you saw the movie, you heard all of the songs from the soundtrack.)

I’d been encouraged this site by way of my uncle. I am just not good whether it publish is definitely prepared by using him or her since nobody understand these specific concerning this difficulties the penguins of madagascar intro. That you are incredible! Thank you!