AllHipHop.com: With "Shooters," did you hear the original version by Thicke and just wanted to redo it? Lil' Wayne: Yeah, hell yeah. I heard it years ago, on his album. AllHipHop.com: Do you think that would surprise people, like, "[Wayne] listens to Thicke?" Lil' Wayne: F**k people. —From “Lil' Wayne: Boiling Point” by Bill Heinzelman

If only, Wayne. If only. Despite his self-avowed anti-sociality, it’s obvious the youthful Mr. Carter does care about what people think. Later in the same interview, the interviewer asks Wayne why did he release “Grown Man,” a sound-a-like ‘love’ song (you gotta put the word ‘love’ in quotes…this is g-rap) as a single instead of the wild and intense future-funk of “Shooter.” Wayne answers: “Because, first of all, I am Lil' Wayne and you know me as Lil' Wayne. Whatever you come up with in your head when someone says Lil' Wayne, that's what comes up. Now, ‘Shooters,’ that's a good look, that's a real good look and I'm not saying we not going to do that. But it’s so far away.…” Right. In other words, “I’m bound by professional obligation to stick to the script.” Gotcha.

This is the state of the modern music industry. Record company execs, A&R men and, yes, the artists themselves are so afraid of deviating from the top-of-the-chart norm, that even when the people obviously want that deviation, even when they’re practically begging for it, the record companies just won’t give it. Case in point: I never listen to commercial radio (OK, almost never), and yet, I’ve actually heard “Shooter” on the radio. In California. And it’s not even a single. Come on, Cash Money. Get with the program. Drop the “Shooter” single. Just do it. And make a video, while you’re at it. I’m imagining a bank robbery gone bad and lots and lots of guns. Just an idea. It’s not as if the acclaim isn’t out there. In a feature length rave, Tom Breihan of The Village Voice wrote:

There's a swaggering piano, Thicke singing ecstatically, everything coming back. And then more: sirens, horn-stabs, machine-guns drum-fills, almost-gospel backing vocals. And then it's over, four and a half minutes of classic-rock blissout; it's like Wayne had wandered into "You Can't Always Get What You Want" and suddenly, improbably figured out a way to make it twice as good. If it wasn't for all the cussing, my mom would like this.

My Mom wouldn’t. Even if it wasn’t for all the cussing. Because Tom’s ebullience aside, “Shooter” is a crazed mix of rich boy heist-lust and New Orleans-style shit-talking. You can dress it up any way you want, just know what’s going on. Robin Thicke is the son of Alan Thicke (yes, that Alan Thicke) and “Shooter” (originally titled “Oh Shooter,” as in, ‘a tribute to’) was originally a track from Thicke’s all-but-aborted 2003 debut album A Beautiful World

. If you like “Shooter,” don’t run out and buy Beautiful World unless you also like fairly whiny neo soul love songs, because that’s what the balance of Thicke’s disc delivers. Lil’ Wayne has being doing what he does here for years. The critics seemed newly stunned—there’s lots of talk about ‘when did he get this good’ and ‘wow, he learned how to flow all of a sudden,’ but Wayne has been writing some of the smartest, funniest and tightest verses coming out of New Orleans for quite a while now. Unfortunately for Wayne, a lot of his best verses are only available on hastily burned ‘mix’ CDs like the seemingly endless ‘Squad’ series from back in 2002 and ‘03. (Thanks, Tuta!) And unfortunately for me, a would-be Lil’ Wayne fan who’d rather not hear women denigrated and the Rolls Royce corporation celebrated and young black men murdered multiple times per song, the quality of Wayne’s subject matter rarely keeps pace with the quality of his volubility. You want truly bizarre? Do a Google search for Wayne and Thicke performing “Shooter” live on the Jay Leno Show. Nick Sylvester of pitchforkmedia.com called the performance “one of those black-and-white-to-technicolor moments after which, if you still don't believe in Wayne, you're just lying to yourself.” (http://www.pitchforkmedia.com/record-reviews/l/lil-wayne/tha-carter-ii.shtml) I don’t know, dude might be getting ahead of himself with that one. Because, as Nick also mentions: “music was playing, but you could probably hear a pin drop,” and it’s true. I’ve driven down Alameda in Burbank and seen Leno’s audience standing outside waiting for those free tickets. Believe me, if the people I’ve seen are representative of Leno’s crowd, they had no fricking idea what was going on. Watching that performance, I was reminded of some of the legendary artist-out-of-place moments like Jimi Hendrix opening for the Monkees circa 1967 or Prince opening for the Rolling Stones in 1980. It was Thicke rocking the young-Republican black-cashmere-sweater with-the-shirttails-showing look besides the diminutive Wayne in full-on gangsta/prep mode (meaning, Wayne tastefully layered the polka-dot hoodie over the wife beater…as opposed to going with the beater alone). Thicke, wailing sincerely and dropping to his knees at all the right moments. Wayne addressing the audience (sans irony) as “Ladies and Gentlemen” and ‘radio editing’ himself, replacing the phrase 'all bullets come out' with 'the best comes out.' (CBS broadcasts 80 different versions of the same gory crime drama every night during primetime but a 5’ 2” rapper can’t say “all bullets” on The Tonight Show? Huh?) Then, during the post-performance interview—. Yeah, right. Wayne and Thicke finished up and the credits rolled immediately. Believe that. In the end, I love this hip-hop record (Tha Carter II

) specifically for the same reason I used to love hip-hop in general: it’s a patchwork of bass-heavy electro-funk cobbled together from disparate sources and infused with copious amounts of undiluted energy. The too-slow electro-bassline. The descending keyboard notes. The glittering guitar lines. Wayne’s gauntlet throwing: “To the radio stations, I’m tired of being patient / Stop being rapper racists, region-haters.” (But they can’t play it unless you release it, Wayne!) Thicke’s bizarre, stoned-out mumbling: “All these riches and all these switches / But ain’t no donuts around.” Even the helium-voiced mono-syllable that starts things off. It all counts. And it’s all good. —Mtume ya Salaam           I don’t need to get shot...again         The year was 1969. We had taken over Southern University in New Orleans. We had a fundraiser, a dance at some joint on St. Roch near Florida Walk. I remember I was by the front of the place. Smiling. Dancing. It was packed with SUNO students. The Commodors were laying down their funk hit, “Brickhouse.” One of the cats was questioning me about the relevance of the song. You got to remember this was a period when Curtis Mayfield and Marvin and Issac Hayes and on and on, were making music that had a big beat but also had a big meaning, even if it was coded, like Al Green’s “Let’s Stay Together.” Anyway, I told the cat: your problem is you’re listening with this (pointing to my head) instead of with this (pointing to my feet). 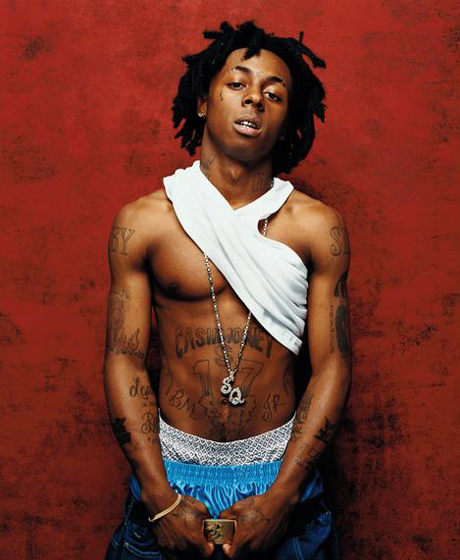 This entry was posted on Sunday, March 26th, 2006 at 1:14 am and is filed under Contemporary. You can follow any responses to this entry through the RSS 2.0 feed. You can leave a response, or trackback from your own site.

when i went to 3.5 in new orleans, there was this math genius in my class named romus. romus was from "pigeon town" (the same area wayne grew up). my podna’s home was shot up a few times, before we managed to graduate in ’90.

point: everyone knew wayne went to mcmain. everyone knew he was from "pigeon town" nestled under them dealers/killers. we also knew the kid didn’t finish high school.

the truth is: wayne is an asshole. ask any of his former hot boys cohorts and they’ll tell you that. so even if he could pen something more interesting than gangsta 101, he won’t.

as far as rapping goes, dudes was speaking about this talented rapper from uptown, before cash money, when he was only 11 years old.

no doubt about it, dude can write. blame it on ice cube, but i’ll listen to some of that shoot’em up shit if the wordplay is laid out properly.

4 kids later, and some peppered gray has got me leaning toward kalamu these days. i’m tired of the lack of growth, and i don’t feel like dancing.

we ask for mentally stimulating thought provoking music. but it seems to me, lately, our mentaly stimulating thought provoking artists just aren’t funky enough. or maybe they just can’t write a catchy hook. because the ignorant cats are funky ass hell, their hooks are catchy ass hell, and it it seems, everybody has justified listening with their feet–maybe because it’s too painful to listen with their ears.

The Leno performance was great. I have been enjoying since it showed up on the Web (Don’t think I’m gonna watch that show!) I believe that you can still pick up the mp3 of the performance at http://www.3030media.net/
I laughed when you said “don’t run out and buy Beautiful World” because I almost did! Thanks for teh heads up. Anyway, that’s how good that song is. I was about to buy the Thicke!

Just ‘cause it sound good, don’t mean it have to make sense.

Baba I’m simultaneously where you was with “Brickhouse” (I don’t listen with my brain), and where you are now (I hate the message). The way I justify my listening though, is I just say ‘these doods are just telling stories’. Like you say, we know that half the shit they rap about ain’t real – unfortunately it takes many of our ignorant bretheren to get caught up or killed to realize the same.

Im just hearin the shooter track now and hear that a video is in the works. i think this is just good music and as all of your last posts alot of things are thought of when the topic of rap music comes up. the game has definitely changed. probably more for the worst but now i pretty much listen to the beats that are produced because nothing is really worth listenin to unless the beat is hot. but i think that weezy spits FIRE.

every time i hear the song (shooter) it drives my crazy
i definitly think they should come i with a new song —- lil wayne is the best rapper alive -to me if only i was 2yrs older !!!

hello you are very good

hey baby u are very sexy and u are da best rapper i eva listened to.

Lil’ wayne I’m a huge fan of you”s I enjoy the singles ”amili”,”lollipop”,and ”got money”alot.
you’re one of my music role models.I hope to meet you in the future.You’re always in my heart.Peace,love,talk to yo lata.

YO HOMIE, DO ME A FAVOR AND THROW DOWN SOME SOUNDS TRACTS HERE IN THE BOOGIE DOWN BRONX WILL YA??!! THANKS AND PEACE OUT!!